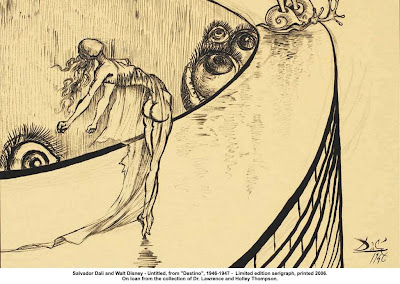 In the late 1945 and 1946, Dali and Disney Studio artist John Hench worked on a short animated cartoon called Destino.
However, financial concerns caused Disney to cease production.
Luckily Roy Edward Disney, while working on the production of Fantasia, unearthed the dormant project and finally released it in 2003!

Destino was to be awash with Dali's iconic melting clocks, marching ants and floating eyeballs.
The six-minute short follows the love story of Chronos and the ill-fated love he has for a mortal female.
The story continues as the female dances through surreal scenery inspired by Dalí's paintings.

I think it is a wonderful short movie with surrealistic images and wonderful animation.